Jadeveon Clowney believes he should be No. 1 overall pick, will put off bone spurs surgery 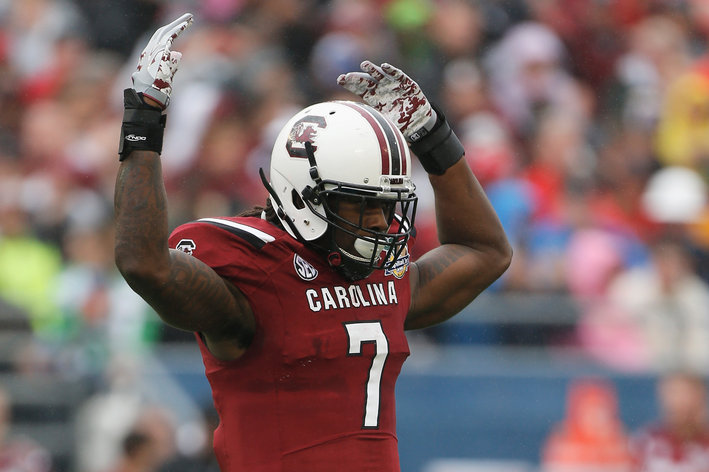 Scott Halleran
Clowney has plenty of confidence that he’s the best player in the 2014 NFL Draft, even with a foot injury that will likely require surgery.
http://www.nfl.com/news/story/0ap2000000324167/article/jadeveon-clowney-says-he-should-be-first-pick-in-nfl-draft

Jadeveon Clowney says he should be first pick in NFL draft

Nobody can say former South Carolina defensive end Jadeveon Clowney’s confidence isn’t where it should be.
“I just think I should be the No. 1 pick taken in the draft, overall. So we’ll see how that goes,” Clowney said Thursday on the Dan Patrick Show.
Clowney’s comments came in answer to a question about whether he would like to be chosen by the Atlanta Falcons , who are slated to draft sixth overall, to be closer to family. He said he would be excited for that possibility in Atlanta, but left no doubt about where in the draft he feels he belongs — right at the top, where the Houston Texans hold the top choice.
Texans owner Bob McNair had some interesting comments about the possibility of drafting Clowney last month. Clowney made 24 sacks in his three-year college career and is thought among NFL scouts to have the sort of immense pass rushing potential befitting of a high first-round pick. The Texans are inneed of a quarterback , however, and could pass on Clowney if one of the draft’s top quarterback prospects proves to be too appealing.
Clowney also said that he plans to continue putting off surgery to remove bone spurs in his right foot. Initially, he planned to have the surgery after the season, but opted to wait until after the NFL Scouting Combine when his foot responded well to a few weeks of rest in December. Now, his plan is to put off the surgery indefinitely, beyond the combine.
“I doubt it,” he said when asked if the surgery would happen after the combine.“It just depends on what the teams want, that get me in the draft. They want me to get it, I’ll get it. If they don’t, it shouldn’t bother me. I’ll try to wait until the next offseason to get it done.“
Clowney said he plans to participate fully at the combine later this month, saying with a laugh that he hopes to run a 4.4 40. Based on his claim of a 4.46 clocking last summer, which was corroborated by teammates at SEC Media Days, that goal might not be terribly far-fetched.
Follow Chase Goodbread on Twitter @ChaseGoodbread .